Deputy Prime Minister and Minister of Foreign Affairs Ekaterina Zaharieva received the managing body of the Association of Honorary Consuls. 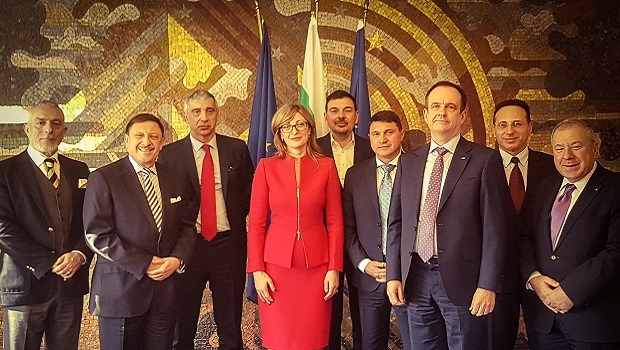 Ekaterina Zaharieva: Our foreign policy must serve an economic purpose

At the meeting Minister Zaharieva discussed opportunities for collaboration in the area of this country’s international and economic relations. ‘Bulgaria’s foreign policy must serve an economic purpose. I keep telling all departing ambassadors that the economy of this country is a top priority. Bulgaria must do well. This can be done through culture and tourism, which would contribute to the advancement of the Bulgarian private sector,’ the Foreign Minister underscored.

Ekaterina Zaharieva pointed out that the Ministry of Foreign Affairs is working hard to streamline its visa services, so that Bulgarian businesses would not suffer as a result of delays and red tape. ‘We are increasing the number of visa centers in Russia to over 50, in China, to over 15, from March we will be using outsourced visa services in India, and we are negotiating with Vietnam as we speak,’ the Minister pointed out.

Ekaterina Zaharieva informed the leaders of the Association of Honorary Consuls that, at the initiative of the Ministry of Foreign Affairs, Bulgaria will host a meeting in October of this year of all its honorary consuls around the world. Such a forum would contribute towards drawing investments to Bulgaria. ‘I believe that the honorary consuls are in a position to do a wonderful job, and they are doing it. I am grateful to many honorary consuls for supporting the development of the Bulgarian private sector,’ Minister Zaharieva stressed.