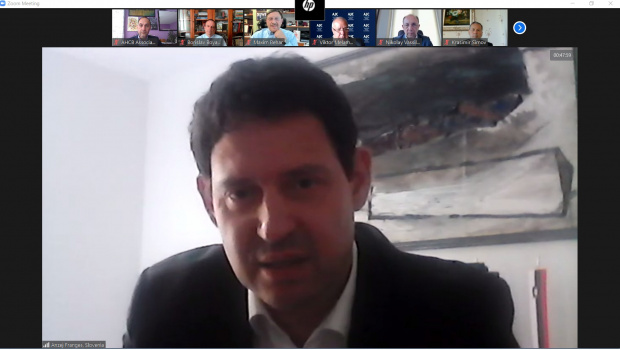 Special guest to the “Meaningful Meetings” initiative of the Association of Honorary Consuls in Bulgaria was Chief of Mission of the Embassy of the Republic of Slovenia in Sofia, H.E. Mr Anžej Frangeš. The discussion was held over Zoom and was on the pressing subjects in the world and the Balkan region, as the Ambassador has deep experience in the region.  Slovenia is part of the 10th Presidency Trio, together with Germany and Portugal and Ambassador Frangeš laid out the priorities and aims in the context of the 2021 Slovenian Presidency of the Council of the European Union starting from 1 July.

Discussed was the good bilateral relationship and strong economic footprint, the importance of which has led to the opening of the Mission in Sofia and dedicated Commercial officer to further extend the bilateral trade.

Mr Anžej Frangeš joined the Ministry of Foreign Affairs in 2003. During his employment at the Ministry, from 2005 to 2009, he was sent to the Embassy of the Republic of Slovenia in Belgrade, where he focused on bilateral cooperation between Slovenia and Serbia and closely followed the Kosovo issue. In 2011, he was seconded to EULEX Kosovo. For the next three years, he discharged the tasks of Regional Liaison Officer for Belgrade and Pristina and, between 2014 and 2016, he was engaged as part of the European External Action Service - EU Delegation in Belgrade, focusing on dialogue between Serbia and Kosovo.

Following his return to Slovenia, he served as Adviser to the Prime Minister for Foreign Affairs, until he assumed the duties of Ambassador in Bulgaria.